A bearer of foreign bodies

The Book of Barely Imagined Beings was having trouble with beings beginning with X until Tom Goreau suggested the xenophyophores, giant single celled organisms that build structures from their own excrement. 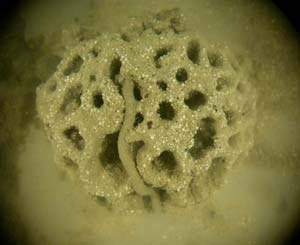 Most of these rarely discussed and poorly understood organisms, including Syringammina fragilissima live on the seabed; but at least one species, Occultammina profunda, is infaunal, burying itself in the sediment.

Earlier this month Zoltan Sylvester, a skeptical geologist, blogged on trace fossils called graphoglyptids that may encode the tracks left by Paleodictyon, an ancient infaunal xenophyophore. These are almost perfect honeycomb-like hexagonal patterns: 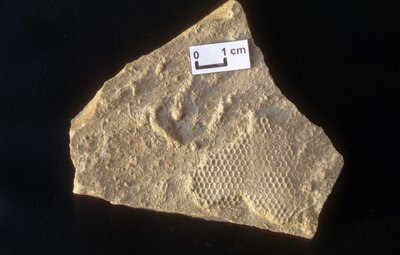 The patterns are so striking, he says, that it wouldn't be surprising if the uninformed were to seize on them as 'crop circles of the deep sea'. But the most widely accepted idea in the scientific community is that they are 'farming traces':


In other words, these guys (whatever they might be, nobody really knows) create well aerated open burrow systems a few millimeters below the sea floor, with multiple openings to the sediment surface, so that chemosynthetic bacteria move in to get the necessary oxygen to oxidize methane and hydrogen sulphide, their favorite food.

Through idle free-association a long way from science, xenophyphores put me in mind of the Dowager Empress, driven (in W G Sebald's account) to absorb all, so obsessed by death that she swallowed powdered pearl every morning as an elixir of invulnerability, and stifled her empire by trying to hold all still. But the association is vague and the differences are huge. Not least, Xenophyophores thrive abundantly while the Empress died of dysentery after eating a double helping of her favourite crab apple with clotted cream pudding.
Posted by Caspar Henderson at 07:44