500 million years, and a moment in time

Like the coelacanths, horseshoe crabs, tuatara lizards, sharks and crocodiles, today's nautiluses are all but indistinguishable from their distant fossilised ancestors [of 500 million years ago].

Exactly why some species survive unchanged is not clear, but it seems there is a price to pay. Living fossils have a very low "evolutionary fecundity": they may have lasted many millions of years, but at the same time they produce very few new species.

For decades, nautiluses seemed to fit this bill, but new research into their evolutionary history and behaviour has produced an unexpected turnaround. Rather than being the last holdouts of a static lineage, the nautiluses appear to be in the midst of an evolutionary adventure, diverisifying at a rate that hasn't been seen in their lineage since just after the extinction of the dinosaurs...

...[But] time is not on our side. The great survivors are facing their greatest challenge - humans. Caught for their shells, which are sold as souvenirs or turned into buttons, nautilus numbers are declining. One population in the Philippines has already been wiped out, and fleets of nautilus boats are now moving farther up the South China Sea...

-- from Nautilus: Chambers of secrets by Peter Ward of the University of Washington in Seattle. 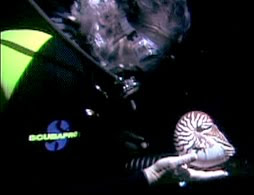