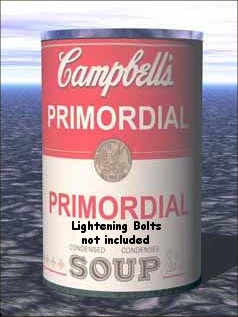 Armen Mulkidjanian makes the case that life as we know it originated in freshwater thermal springs not unlike Darwin's warm little pond. Jack Szostack is sympathetic but Nick Lane continues to argue that deep sea vents are a more likely starting point. Martin Brasier, who discovered the oldest fossils so far -- 3.43 billion year old bacteria in Australian rocks -- holds fire. He says 'The rock record is the only safe witness we have.'

I tried to cover these issues in outline in the Xenophyophore and Yeti crab chapters my forthcoming book.  It looks as if I didn't go too far wrong.
Posted by Caspar Henderson at 09:57

Email ThisBlogThis!Share to TwitterShare to FacebookShare to Pinterest
Labels: Origin

I thought for a moment that you had done a chapter on yetis, and was getting very excited.

Ha! No, there's very little cryptozoology in the book. As far as I can remember there's no mention of gigantopithecus, a ten foot tall 'orangutan' which probably went extinct in the Pleistocene, but which some people like to think lived on to become to the prototype of the Yeti. There's a passing reference to the idea that the elasmotherium, a giant rhino that once roamed the Russian steppes, is the original of the unicorn. Unfortunately I couldn't find any serious people who believed this. Some of the whackiest cryptozoologists are creationists who think pterosaurs still live on Mount Ararat and various other places.