'the infinite succession of soft and radiant forms' 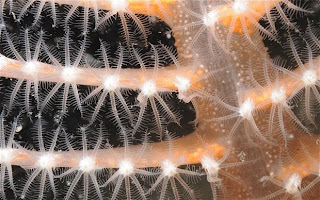 If anyone goes down to those shores now, if man or boy seeks to follow in our traces, let him realize at once, before he takes the trouble to roll up his sleeves, that his zeal will end in labour lost. There is nothing, now, where in our days there was so much. Then the rocks between tide and tide were submarine gardens of a beauty that seemed often to be fabulous, and was positively delusive, since, if we delicately lifted the weed curtains of a windless pool, though we might for a moment see its sides and floor paven with living blossoms, ivory-white, rosy-red, grange and amethyst, yet all that panoply would melt away, furled into the hollow rock, if we so much as dropped a pebble in to disturb the magic dream.

-- so wrote Edmund Gosse, recalling his boyhood seashore explorations on the Devon coast with his father in the 1850s.

News from Scotland, including (supposedly) the first sighting in British waters of the ancient amphioxus, or lancelet, indicates that at least a few inshore locations in the north of this island have survived the ravages of more than a century of intense fishing and other depredations. Could this be a token of more to come, and of a measure of recovery? 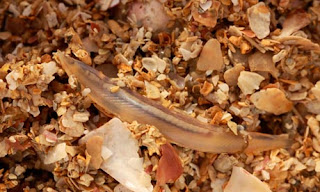 Posted by Caspar Henderson at 06:38