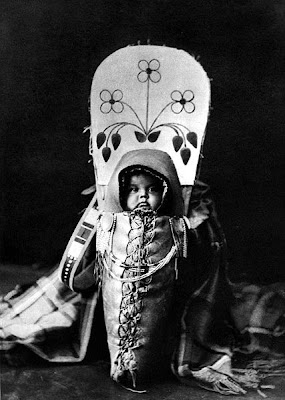 There was once a monster which lived in the valley of the Clearwater River near Kamiah. This beast devoured all the animals that lived in the country for miles around and became such a menace that Coyote...decided it must be killed. Arming himself with a flint knife, he jumped down the animal's throat and stabbed it in the heart. Then he cut the body up into pieces and from them fashioned tribes of Indians which he sent to occupy the mountains and plains round about. Finally, he discovered that he did not have a tribe for the beautiful valley in which the monster had lived, so he squeezed a few drops of blood from the heart and from this made the Nez Perce. Thus from the lifeblood of this strange animal came a tribe having many of the most admirable qualities possessed by human beings.

-- Nez Perce origin story via The Flight of the Nez Perce by Mark Brown (1971) via Wikipedia.
Posted by Caspar Henderson at 07:21