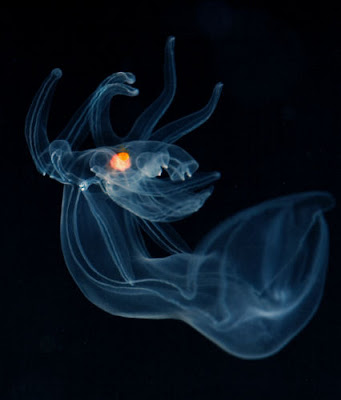 The larva of Luidia sarsi is a semi-transparent diaphanous sprite that feeds on algae and grows to a remarkable 4 centimetres. Then something extraordinary happens. Instead of changing shape to become an adult, a cluster of cells lining the larva's internal cavity grows, like an alien invader, and out of these a starfish is born. Floating free from its other self, the adult form settles on the ocean floor, where it survives and grows by hunting down other starfish in the dark of night. Meanwhile, the larva continues its vegetarian existence, grazing the surface waters above.

-- from Evolution's freak factory, in which Frank Ryan suggests hybridisation played a role in Cambrian explosion.

P.S. In a highly critical review of Ryan's book Metamorphosis, Josh Trapani says that Ryan champions the views of Donald Williamson who postlated that interbreeding occurs between not just different species but different phuyla; for example, between ascidians (sea squirts) and echinoderms (sea urchins):


He postulates that this has happened repeatedly between different groups of widely divergent organisms. Moreover, he postulates that the hybrids look like one parental species as larvae and like the other as adults, rather than simply exhibiting a mix of characteristics, as most hybrids do. Not only is this hypothesis not supported by evidence, but plenty of evidence, including powerful molecular evidence, directly contradicts it.