Whether consciousness is mysterious or not, it is surely the case that matter is 'much odder than we thought.' [1] 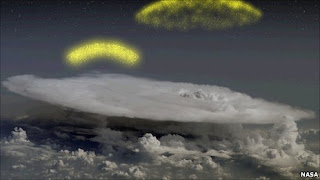 Image: 'Electrons racing up electric field lines give rise to light, then particles, then light'
Footnote

[1] MacNeice expressed this as well as Auden. Walter Benjamin suggested Kafka had a kind of vertigo about the world that matched to the dizzying nature of reality as explained by modern physics (or at least physics as seen in 1928 by Arthur Eddington in his Nature of the Physical World.)

P.S. 5 Feb. Mary Midgley is not impressed by Soul Dust either.

P.S. 26 Feb: In his new book on universes, John D. Barrow quotes Eddington: 'Something unknown is doing we don’t know what.'
Posted by Caspar Henderson at 16:59