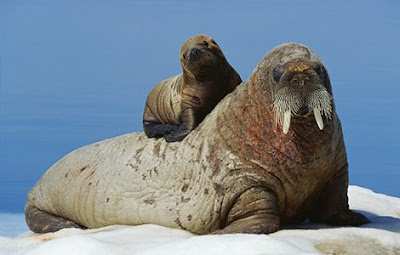 Walruses are a delight for many. (In my case they played an important part in an encounter with a remarkable result.) Natalie Angier joins the fan club with an article detailing some striking walrus virtues, including a kind of music and an ability to 'walk' food along their moustaches.

Her article does not mention that, historically, humans have killed most walruses, especially in the Atlantic. Admiration and extirpation have been bedfellows. Following an encounter in Svalbaard I noted (1):

The charm of this animal was evidently as great to people in the 17th century as it is for us today. In 1611 a young walrus was shown at the English court ‘where the kinge and many honourable personages beheld it with admiration for the strangenesse of the same, the like whereof had never been seene alive in England. As the beast in shape is very strange, so it is of a strange docilitie, and apt to be taught’.

But that was the view for home consumption. In [their] first encounter of 1604 the English soon learnt walruses were not only harmless but rich in oil. In 1605 Muscovy Company ships returned to Spitsbergen, spending the entire summer killing walruses and boiling down the blubber which was used for soap. By the third season, in 1606, they were so experienced in walrus hunting that within six hours of landing they had killed between six and seven hundred beasts out of which they made twenty-two tons of oil and filled three hogsheads (large barrels) with tusks.

I weep for you, the humans said, I deeply sympathize.

Currently IUCN lists two of three subspecies as of 'least concern' for extinction. But there is some concern that climate change will reduce their numbers sharply.

[Footnote 1: I think I was quoting from No Man's Land: A History of Spitsbergen by Sir Martin Conway (1906).]
Posted by Caspar Henderson at 07:32

Email ThisBlogThis!Share to TwitterShare to FacebookShare to Pinterest
Labels: walrus

Nice post. I enjoyed Angier's article enormously, and your historical footnote was news to me. Not a surprise, though, as we've hunted so much to near-extinction (or at least into submission), either directly or indirectly. Continuing to enjoy your blog mucho.