Running in the family

The Khoisan people...were well known for being able to run down swift prey, including steenboks, gemsboks and wildebeests and zebras, provided they could hunt in the heat of the day. The Tarahumara Indians of northern Mexico chase down deer till the animals are exhausted, then throttle them to death by hand. The Paiutes and Navajos were reported to do the same with pronghorn antelopes. Australian Aborignes chased down kangaroos, but only by forcing them to reach lethal body temperatures.

-- from Bernd Heinrich's Why We Run (2001), an account consistent with the thesis that "endurance running is a derived capability of the genus Homo, originating about 2 million years ago, and may have been instrumental in the evolution of the human body form" (Bramble and Lieberman, 2004).

If these guys are right, endurance running has been one of the things fundamental to human nature. And its origins may stretch back into the roughly four million years between what is likely to have been powerful walking but not much running by Orrorin tugenensis and what may have been a running ability in Homo Ergaster/Erectus similar to, or even surpassing, that of modern humans.

This is probably consistent with the hypothesis (blogged here) that upright walking began in the trees and human ancestors conserved this gait. And if this is right then rise from knuckle-walking in our ancestry implicitly schematised in the alignment of existing cousins shown Huxley's 1863 graph may not be something in which our ancestors took part: 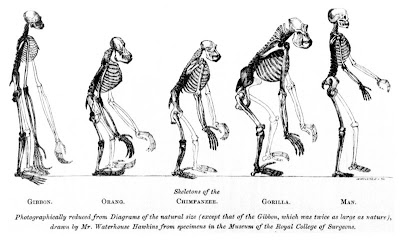 OK, none of this news. So why mention it? This project is concerned with living species and their ends, but everything lives in the shadows of forgotten ancestors, and I am awed at the long existence of our robust, fast-running cousin Erectus.

Across Africa and Asia, Erectus survived for some 1.8 million years (and may have hung on at the periphery for another 200,000 years or so ). That's many times as long as anatomically modern humans have existed and hundreds of times as long as the period since agriculture began. Through all this immense space, they probably hunted and ran, building on upright walking skills older than their lineage. 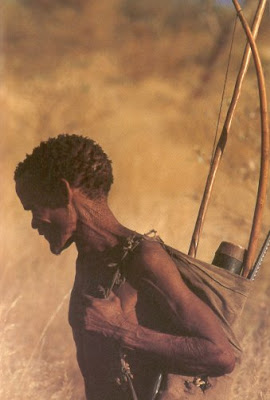 Image from Khoisan. Is that a rebar in the back of his pack?
Posted by Caspar Henderson at 09:49